No products in the cart.
0 € Cart
Menu

Today’s promenade was nothing more than an unpaved dirt road at the end of the 18th century. It was only after Elisabeth’s spring was rediscovered that the building boom in Homburg began and this gave rise to new streets. The former “Leimenkautsweg” became the “Landgräfliche” and later on it’s name was changed again to the “Städtische Promenade” (Municipal promenade). The Kaiser-Friedrich promenade has only had its present name, which is unique in the whole of Germany, since 1889, when monuments were erected on the “Schmuckplatz” opposite our villa.

History of the "Villa in the spa gardens”

The first houses were built in the street in 1840, but the structured development only began with the completion of the first spa building in 1843. Many investors were attracted by the economic boom in our town. Baron Julius de Wellens was one of them. In 1846 he hired the young architect Christian Holler, who had just completed his training. He would later write this about the town’s history …
De Wellens lived in the house that was formerly No. 11 until 1853, because at that time the promenade was still divided into ‘lower’ and ‘upper’ sections. Later on it belonged to Ferdinand Wilhelm Büdingen, who lived in Frankfurt. From 1865, the owner’s name was Philipp Heinrich Debus, which can still be seen in the land registry, and later on it passed on to Richard Debus, presumably his son.

In 1889, the merchant Debus built another building on the property. The photographer Julius van Bosch moved in there with his studio, which was not unusual in the promenade at that time. A few years later it was rebuilt again. Philipp Debus, who ran a white- and manufactured-linen business, set up a shop there.
This was followed by a series of further renovations to “Villa Debus”. However, those made by Jacobi, a master builder, deserve special mentions. What was special about it was not only the extensive interior work that was carried out and the raising of the attic, but the builders themselves. Like Holler, Louis Jacobi and his son Heinrich were also highly respected master builders in our town. These three regal builders turned our villa into something unique, because no other property in Bad Homburg had all three “star architects” working on it.

Use as a guesthouse

When the house started to be used as a guesthouse is still unclear, but it was probably around the middle of the 19th century. Records show that the prices for an overnight stay in 1902 were 10 – 15 marks and 15 – 50 marks in the high season. Breakfast was an additional 0.80 – 1.20 marks. Those who brought their servants with them could also rent a kitchen.
Because of its location, our house was always well frequented, as can be seen from the spa lists held in the town archives. Many guests travelled with their own staff, who were then accommodated under the roof – which nowadays are our cosy single rooms. The majority of the guests came from Germany, but some also came from Great Britain, the Netherlands, Russia, South America and the USA.
A particularly prominent guest was HRH Prince Mahidol of Siam, the youngest son of King Chulalongkorn. The latter himself came here for a cure in 1907 and was so enthusiastic about his recovery that he gave the town its first Siamese temple.

From "Villa Debus" to "America House"

Villa Debus became America House when American troops entered Bad Homburg in 1945. The occupiers made reading material and information material available from this “information centre”. A form of “re-education” took place from here, i. e. re-education of the German population with regard to the political and ideological fields. After its dissolution in 1951, Bad Homburg’s Volksbildungskreis (People’s education centre) – predecessor of today’s Volkshochschule (Adult education centre) – moved into six of the villa’s rooms and took over the entire stock of books left behind by the Americans. 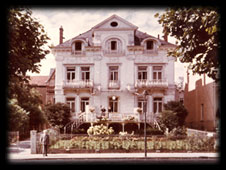 The spa administration bought the house in 1954, which was once again used as a guesthouse. Petry GmbH & Co. KG was the operator during the 1970s.
Kur- und Kongreß GmbH decided to sell the house in the 1980s. The proceeds were to be used to partially finance the new spa building. However, it took several years before a new owner was found, because although it was to continue being used as a hotel, it had neither a breakfast room nor a reception area.

inauguration of "Villa am Kurpark"

Our family bought the house in the early 1990s and carried out extensive rebuilding work. The villa’s foundations were extended so that the missing rooms could be constructed in the basement. All of our rooms have been fitted out to meet today’s standards since then. The building’s successful renovation has been acclaimed by the spa and tourist association.
The “Villa am Kurpark” (Villa in the spa gardens) as it is now called, reopened in 1993. Since then we have been delighted to welcome our guests in individually furnished rooms, which still tell the house’s long history in loving detail.